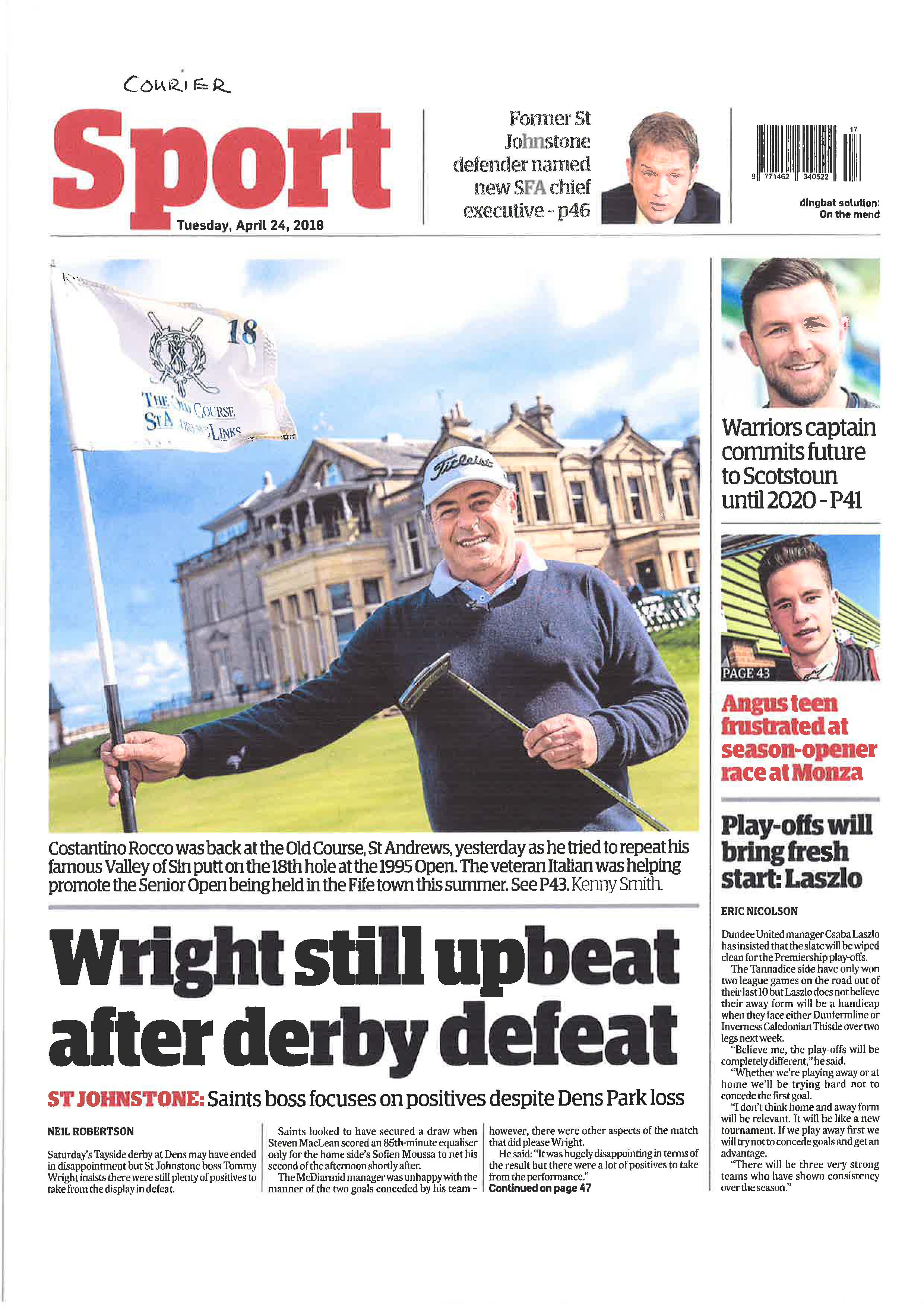 John Daly and Costantino Rocca, who conjured up an epic finish to The Open 23 years ago, will aim to turn back the clock this summer when they renew their great rivalry on the Old Course at St Andrews in The Senior Open presented by Rolex.

The 2018 edition of the event will represent the first time that The Senior Open has been contested at the Home of Golf since its inception in 1987, and the return of so many golfing legends to St Andrews from July 26-29 will unquestionably revive magical memories of the past.

One of the most nerve-jangling Open finishes played out over the Old Course occurred in The Open in 1995, when Rocca touched the hearts of millions of golfers worldwide by first fluffing a chip to the 72nd and final green then, improbably, holing the resulting 65-foot putt to secure a play-off.

The Italian lost out in the four-hole play-off to Daly, who captured his second Major title in the process. However, it was Rocca’s outrageous stroke from the Valley of Sin just off the 18th green which captivated the crowds and earned the smiling Italian an unlikely fame which has lasted to this day.

Both players, now competing in the ranks of senior golfers, have confirmed they will return to the Old Course in search of the Senior Claret Jug, but Rocca stole a march on his American rival today (Monday) when he paid an early visit to the scene of his remarkable stroke of good fortune.

At 61, Rocca remains the effervescent, cheerful character who played in two Ryder Cups, beating no less than Tiger Woods in the 1997 singles at Valderrama, just 18 months after capturing the biggest title of his career, the PGA Championship at Wentworth Club.

This time, for the benefit of watching media on the steps of The R&A Clubhouuse, Rocca undertook to re-enact that 65-foot putt from 1995 – using the same putter which he wielded like a magic wand all those years ago.

Rocca said: “It’s great to be back at the Old Course again. It never loses its charm, and I can’t wait to return here for The Senior Open. It is the place where I hit the shot which made me famous around the world and I am thrilled to have perhaps one last chance to play at such an great venue.

“People still talk about that moment in 1995 many years afterwards, and I can still remember the occasion as if it was yesterday. When I made a mess of my chip and left myself in the Valley of Sin with that long putt to get into the play-off with John Daly, many people were downhearted. They didn’t give me a chance of holing the putt.

“However, I kept thinking positive and just concentrated on forcing a play-off. I saw the line and as soon as I hit the putt I honestly had a feeling it was going to go in…and it did! Everything just went crazy after that.”

Rocca, who famously collapsed on the ground, banging his clenched fits on the turf in exultation, added: “There is an old sporting expression that ‘no one remembers who comes second’, but just like Jean van de Velde at Carnoustie, there are exceptions to that rule!”

Daly, who has a rare opportunity to add a Senior Major at the Old Course to add to his 1995 Open triumph, recalled: “I’ll never forget watching Costantino’s putt on the 18th go in.

“When I saw him fluff his chip, I thought that was it and that I would be The Open champion; but what came next I think surprised all of us.

“I felt really good about my game going into the play-off, and was so pleased when the final putt dropped. To win The Open at the Home of Golf is something truly special, not many golfers have had that opportunity over the years.

“I can’t wait to go back to St Andrews for this year’s Senior Open, it will be a truly memorable week and a fantastic chance for spectators to come and watch some of golf’s greatest players on one of the world’s most recognisable golf courses.”

A large array of Major Champions, Ryder Cup captains and global tournament winners will tee up in The Senior Open presented by Rolex on July 26, including defending champion Bernhard Langer of Germany and three-time winner Tom Watson of the United States.